Presents
Each organising school takes it upon themselves to present a gift-cum-souvenir to all the participants. This time the present was a handsome and very ecological cardboard briefcase containing several splendid books and tourist literature – about Bled, the Postonja caves, including a DVD. There was also a ball-point pen in the AEHT colours and a medallion with the AEHT logo mentioning the name of the event. And for the hungry participants, a chocolate broach and a little box filled with chocolates. Many thanks to the organisers
Intelligent Badge
As usual each participant received on arrival a laminated badge with all the necessary information: nationality, director, teacher, student, guest, organiser, etc. But what was novel was the information printed on the back of the badge, where and when the important events for each day were taking place. And a telephone number in case of problems. What a good idea!
Pious Wishes
During the General Assembly president Alfonso Benvenuto made the meeting laugh when discussing the AEHT’s website, especially when he said, ‘All the reports are on the website. You should all consult it every day!’ Adolf Steindl intervened to advise consulting the site once a week, meaning that that often would be already quite good!
Flag Stories
Each year the presentation of the national delegations is always an important part of the Conference; and (almost) every year there is a little ‘hiccup’ which slips into the ceremony arrangements. This time it was caused by the appearance of the American flag which drew comments from several people, who thought that since we are a European association, this flag should not be displayed among the others. And then there were the Aland Islands, officially part of Finland, which were represented by a participant who, with great courage, had come to wave little flags symbolising this small island off the coast of Finland, which is seeking its independence.
Weather
The Bled tourist brochures are splendid: blue sky, snow-capped mountains, light blue lake etc. So it was bad luck for the participants in the 17th Annual Conference – someone was having fun playing with the thermometer. The result was a thick covering of cloud over the whole region with mist, intermittent rain and low temperatures. The only little bright period happened as we were returning from the Postojna caves, when a few kilometres from the capital Ljubljana the sun put in an appearance.
Anthem
The AEHT is a great European association and because of this some organisers make a point of including the playing of the European anthem, taken from Beethoven’s Ninth Symphony. We missed this in Slovenia, which became a member of the European Union as recently as the Spring of this year. What a shame!
Slightly forgotten Students and Teachers?
Generally speaking the students and crafts-men and -women are asked to undertake a considerable amount of work during the event – to be available at information points, to works as guides, to prepare rooms, to serve meals, prepare the gala dinners, etc. And traditionally during the gala dinner the students and their teachers are asked to perform a march past, so that the delegates can express their thanks for all the hard work they have contributed. But this time there was no such parade, except at the Astoria hotel during the Slovenian evening, when of course they were loudly applauded. But although many delegates were obviously expecting a parade on Saturday evening, apparently no-one had taken the initiative to arrange this
Zell am Ziller
Whenever the Zell-am-Ziller school (from Austria) leaves home, its students and teachers never forget to leave their mark. Not only do the director Alfred Muller and his ‘troops’ wear their uniform at each official occasion – they also place at each ‘strategic’ position brochures and posters proclaiming the charms of the Tyrol. That is what you call marketing …
Absence of Raoul and Françoise Hurault
‘I say, the Huraults aren’t here this year …’ – say those who have been attending the Conference for years. The Huraults were an almost legendary couple at the Conferences (see Interviews at the Linz conference) and took pleasure in attending, hardly missing any seminars, lectures or the General Assembly. Françoise and Raoul Hurault were quite simply part and parcel of the Conference. Let us hope that nothing serious has happened to prevent them from coming to Bled.
Future leaders!
Two students from the Bled school took charge of the animation of the major events of the Conference. Katja Pretnar and Gregor Silc are without a doubt among the future leaders of their profession. They are totally natural in the way they smile and welcome their guests, and were two superb ambassadors of Bled and Slovenia, bringing their contagious enthusiasm whenever they performed. Well done! 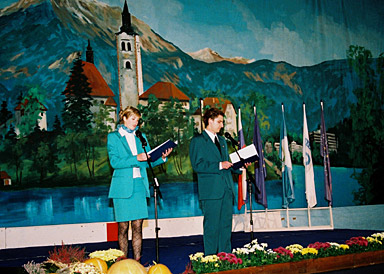