THEME EVENINGS
Each year the Conference organisers go to great lengths to provide their guests with a range of high quality cultural and gastronomic offerings. Bled was no exception to this, and organised not only the gala evening (of which more later) but also three particularly attractive theme evenings..
CONCERT IN SAINT MARTINS CHURCH
Bled’s beautiful neo-gothic St Martins church was packed to capacity on October 13th at 9pm for the fine concert given by three talented musicians: Mojca Brus on the organ, Janja Hvala soprano and Eva Jurgec oboe.
Taking as their theme a journey through the church music of the various periods, the three musicians gave free reign to their talents in an atmosphere of attentive reverence, such as is fitting when the organ and church singing combine to enchant an enthusiastic audience – especially with various versions of the ‘Ave Maria’: the various different settings gave a rare insight into the state of mind of each composer. It was a truly beautiful evening in this sacred building with perfect acoustics. At the end of the concert the performance was greeted with warm applause. And in accordance with tradition the three musicians acknowledged the applause in the church’s crossing, and received bouquets of flowers.
THE SLOVENIAN EVENING
The following day, Thursday October 14th at 7pm, it was the Hotel Astoria which ‘put a quart into a pint pot!’ The tables were beautifully laid and decorated with autumn colours; the students from the Bled school greeted us with broad smiles; we were served with excellent Slovenian specialities, including a penny bun mushroom consommé served in a much admired transparent pastry bowl. We were also treated to highly dynamic entertainment dreamed up by the students: a cock and hen sketch, followed later on by a team which performed a sketch outlining all the things that tourists can do in the Bled region; there was Slovenian singing and zither playing, and in conclusion a march past by the kitchen and restaurant teams who were loudly applauded by all those present – the guests had been enchanted by the relaxed and charming atmosphere. 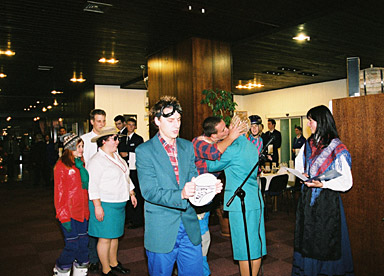 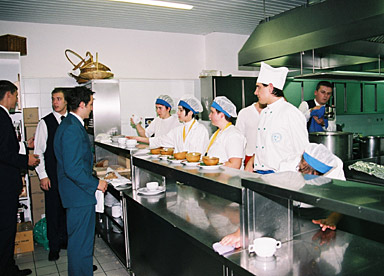 Behind the scenes of the evening 's entertainment 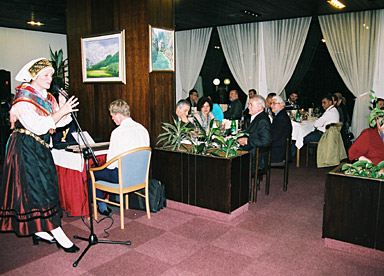 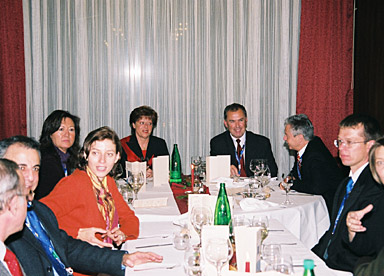 At the official table 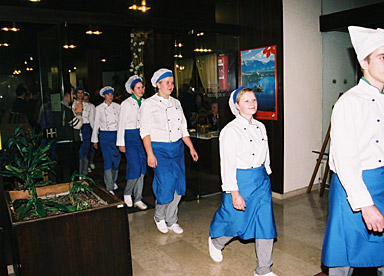 The students march past

THE MAYOR'S RECEPTION
A change of scene for the reception on Friday October 15th – this time we were at the Golf Hotel as guests of the Mayor of Bled, Joze Antonic, to taste typical Slovenian produce. Milan Kriselj, a teacher of tourism geography, greeted the guests in the name of the Bled school and presented Simona Strauss, 2003 wine queen of Slovenia. Joze Antonic expressed his great pleasure at hosting such an international gathering in Bled, and wished everyone a pleasant evening and an excellent stay in Bled, while Alfonso Benvenuto took pleasure in handing out some presents. The wine queen presented the various wine producing regions of Slovenia, before passing the microphone to Alès Kristancic, inheritor of the Movia 1820 wine cellars, who had brought us three very superior wines from his own cellars, which were served at their best and accompanied by cheeses, ham and other pork products from the region. This great expert had the task of presenting Slovenia’s vineyards, accompanied by particularly attractive Slovenian music played by a local band. What a fine evening, with no formality, in keeping with the straightforward nature of Bled’s first law officer, and what a great communicator! 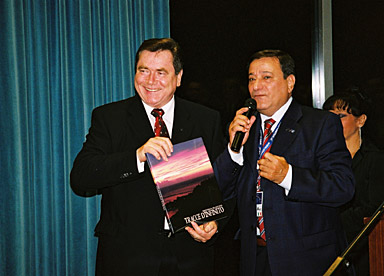