Alfonso BENVENUTO, president
Alfonso Benvenuto is all smiles, obviously a happy president, even if the AEHT financial accounts have made him lose some sleep. So he’s been president for a year – what does he have to say about this first year?
First of all I should like to say that here in Bled we have had an amazing welcome. I find everything pretty well perfect in this little Slovenian town, which is very well organised for tourism. And of course you have to find room for more than 600 people! And I am doubly pleased because Bled students have taken part in all these competitions which have been organised as part of this Annual Conference. In fact, at various levels, the whole school has participated, and this is the purpose of the Conference, not only for the students, but also for the students together with the teachers – to meet and exchange ideas – that is the strength of the AEHT.
I should add that the seminars which have been arranged this year have been really superb. I’m thinking of the one organised by Michel Gaillot with Georges Asseraf about the European ‘common skills inventory’ BTS, and the one run by Gilles Honegger from the ACCOR group. These events have made me satisfied. And the thought of all the young students who have been able to go abroad thanks to Marco Otten of CENET.
Over my first year as president I should also say that the Presidium and the Executive Board have also worked well. And, as I said at the General Assembly, each national representative should be, or should become, ‘the long arm of the AEHT in his or her country …’. National representatives should contact all the schools, take part in exchanges and competitions and be in touch with the Presidium, and make appropriate proposals. The AEHT must be even more active in every area. The schools are most important for the future: good hospitality, good service and professionalism are tantamount to good business. Our schools represent the financial success of each of our countries. But it is up to each country to ensure that their hotel and tourism schools perform well, and to this end they need to be given the appropriate means.
I have also noticed that the students have taken part - and are also now taking part - in these Annual Conferences in a spirit of great friendship. This is a really good thing. And the fact that Slovenia, one of the ten countries which have recently joined the European Union, is the first of these countries to organise the Conference, is a really important thing. I hope that the spirit which I am trying to encourage can be understood by everyone, so that everyone plays a full part. It is in this same spirit that I express my admiration for the Turkish team who, for the second time in the history of the AEHT, has decided to organise the Conference in Antalya next year. And finally, I should like to say that I want there to be a very open form of management within the AEHT, and that in this respect the members of the Presidium help me enormously …’

Louis ROBERT vice-president responsible for competitions
Year after year the various activities have been refined so as to minimise the possibility of any slippage or discontent. This is the case with the competitions which have often been a cause for complaints – sometimes justified, sometimes not. Now the AEHT has set up a CAT - Competition Assistance Team. Its ‘boss’ is Louis Robert, former president and now vice-president. In the bus on the road between Bled and Ljubljana, he gave me his views on the subject.
‘ This CAT was set up almost a year ago in Senigallia, as a consequence of all the problems which had arisen in this or that area of the competitions. Until then there were no precise rules. This time, the CAT is there. It is made up of four specialists who are used to competitions - Anne Dearey (Ireland), Romana Bauer (Austria), Helena Cvikl (Slovenia) and Asdis Vatnsdal (Iceland). And there is myself, the person responsible for this CAT. The competition rules were drawn up, and applied here in Bled for the first time. From now on the rules will be applied to all AEHT competitions. Generally speaking I would say that it went well and that the rules were applied, although obviously some tweaking will be necessary.
The objective of rules such as these is to place all the competitors on an equal footing, to give them all an equal chance right from the start. An example of this is the use of the ‘single basket of ingredients’ which all competitors must use.
Another thing: the composition of the teams, which is now decided by drawing lots in public so that there is no unfairness or favouritism. And the rule that all communication must take place in one of the AEHT’s two official languages. This is important in that it helps to avoid situations which may lead to incidents.
But let us be clear: we are not talking about checking up on the organisers, but rather about helping them. We are offering them support. And now the CAT is up and running! ' 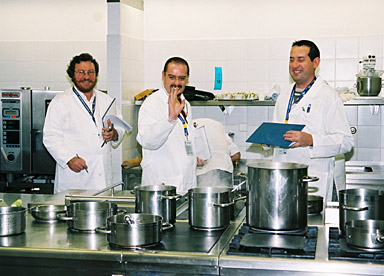