It is traditional for each Annual Conference to close with a special evening during which there is an entertainment, a festive menu and the award of prizes to the students who have taken part in the competitions. This tradition was continued on the evening of Saturday October 18th at 18.00 in the large sports hall of the DGI-Byen hotel, the very heart of the 16th Annual Conference.
After a short message of welcome from Christian Beck, the evening’s compère and the lynch-pin of the Copenhagen conference, Sören Kühlwein Kristiansen, the director of the Copenhagen Hotel School, addressed the delegates in these terms : ‘I hope that you have enjoyed yourselves in Copenhagen – we certainly have enjoyed having you. There are 584 of you from 30 countries who have come here to take part in this conference. Our thanks go to the AEHT for entrusting this task to us, to the seven Danish schools. Many thanks to all the staff, to all the colleagues and to all the students for their hard work and willingness to help. We enjoyed watching you in action, and the results are amazing.’
Next it was the turn of each delegation to be called, always an eagerly awaited moment since it allows one a better idea of the size of each delegation, which is duly applauded as it is called. An especially enthusiastic round of applause greeted the particularly numerous Italian delegation.
Austria, Belgium, Bosnia-Herzegovina, Bulgaria, Croatia, Czech Republic , Denmark, Spain, Estonia, Finland, France, Greece, Hungary, Ireland, Iceland, Italy, Latvia, Luxembourg, Mexico, Norway, The Netherlands, Poland, Portugal, Romania, Russia, Slovakia, Slovenia, Sweden, Turkey, Ukraine, USA.
Christian also took the opportunity to thank all the sponsors who had enabled the organisers to keep the cost of this Copenhagen conference to a strict minimum.
President Alfonso Benvenuto, who had already introduced his Managing Team at the General Assembly, now introduced them again to the 600 participants present at the gala dinner, and took the opportunity to thank the Danish organisers and past president Louis Robert for his commitment. He emphasised that he would throw himself energetically into working for the AEHT, and exhorted the young students to devote themselves to the cause of Europe and of peace. Finally, not forgetting his Italian colleagues, he addressed a special greeting to them in Italian 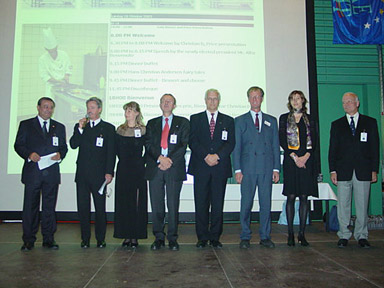 The new team is in place for the next three years.
PRESENTS AND PRIZES
The festive evening would not have been complete without the giving of presents. There were presents for Jean Paul Bernard, Mary Owens, Akos Sasvary, and for the whole Danish team, with the Danish Director at the head of the list : Peter Andreas Ingeberg, Mei-Li Huang, Lars Thaysen, Jane Mandrup Tonnesen, Christian Beck, Sören Kühlwein Kristiansen, Arne Tang-Petersen et Per Mandrup. This was followed by the traditional prize-giving to the students who had been placed in the various competitions. 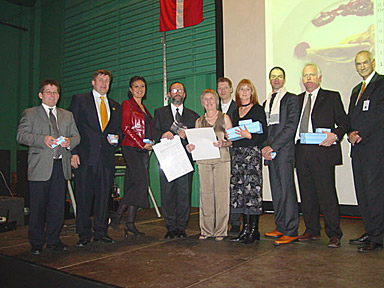 PRIZES ARE GIVEN TO THE STUDENTS

THE AEHT FLAG IS HANDED OVER TO BLED
In accordance with tradition, the president conducted the ceremony of handing the flag from the representatives of Copenhagen to those of Bled. This moment of emotion was greeted by loud applause from the audience. 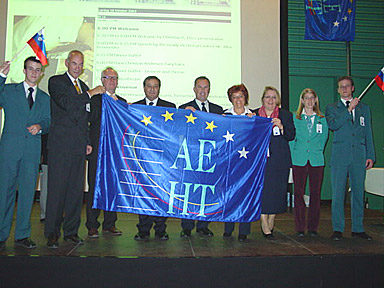 The representatives of Copenhagen handed the flag to those of Bled

AN ENTERTAINMENT BASED ON ANDERSEN’S FAIRY TALES
An entertainment illustrating Andersen’s Fairy Tales was just what was needed to round off the official part of the evening’s proceedings. It was performed by a very dynamic troupe of actors representing the famous characters of the fairy tales which made Hans Christian Andersen famous. It was a wonderfully poetic moment, on the theme of Wonderful Wonderful Copenhagen, and was loudly applauded by everyone present. 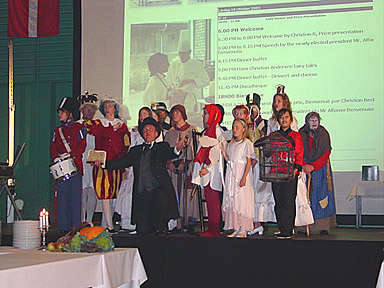 The whole group of performers gets together for a triumphant finale.

And the evening ended as these occasions always do, with participants gradually leaving around midnight, with final embraces and promises to meet again in Bled in 2004!
FaLang translation system by Faboba