PLEASANT UNANIMITY AND THANKS FOR THE WORK OF THE OUTGOING TEAM
The Ordinary General Assembly was held according to schedule on Friday October 17th at 9.00 am in the large hall of the Copenhagen Hotel School. The meeting, at which the mood was relaxed, took place in the presence of the representatives of the schools present at the conference, who enjoy voting rights
Louis Robert, still president, declared the meeting open and announced the membership of the new Managing Committee, headed by Alfonso Benvenuto : vice-presidents Mary Owens and Akos Sasvari were leaving the Managing Committee, and were replaced by Boguslawa Pienkowska and Neme Rand. In January 2004 John Rees Smith would leave his post of General Secretary for professional reasons, though he would remain as the AEHT’s official translator and interpreter. He will be replaced as General Secretary by Nadine Schintgen. 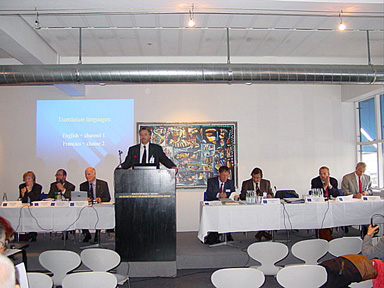 Louis Robert presides over his last act as president : the opening of the General Assembly 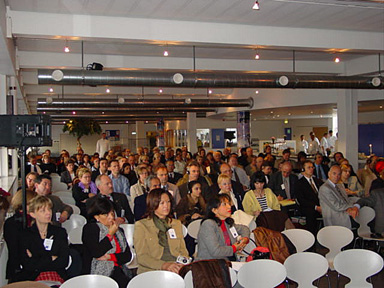 the large attentive audience of delegates

Following these announcements the assembly was asked to approve the minutes of the general assembly held in San Remo in 2003. This was a mere formality as the minutes were approved unanimously. The president also reminded the meeting of the responsibilities of each vice-president
President-elect Alfonso Benvenuto briefly listed the events for 2003 : Festival of Gastronomy in Venice, Workshop in Vienna, Festival of Gastronomy in Croatia, European Christmas in Senigallia from December 12th – 17th. He also took the opportunity to give warm thanks to Umidia Nardone and her team for organising the 2002 Conference in Sanremo, and to Christian Beck and his team for the 2003 Copenhagen Annual Conference.

THE FIRST HONORARY MEMBERS
The following honorary members were approved by acclamation :

Jean Paul Bernard gave a short speech in which he expressed his great pleasure at being present in Copenhagen : "I remember with affection Martin Bruder and Sibylle Schoch , obviously the association has changed, but it still represents the beginnings of a united Europe, it is our treasure, and the AEHT spirit has remained the same, there is the same complicity, the same family atmosphere, new friendships are formed, new projects are put together, and national frontiers are abolished. The Annual Conference is a meeting of a Europe-wide family with the good of our students as its objective. The AEHT must continue to do its ground-breaking work." These warm words touched the hearts of the audience, who applauded them with obvious emotion. 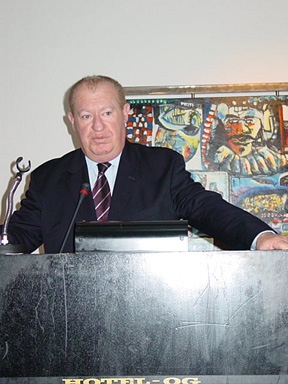 THE VICE-PRESIDENTS REPORT ON THEIR WORK
Next, the vice-presidents took it in turn to report on their work. Michel Gaillot spoke about the duties of Christine Hurinville, mentioning the small number of seminars in 2003, and the prospect of a much richer offering in 2004. ‘I am touched that Jean-Paul Bernard is with us,’ he said. ‘Jean-Paul has achieved his remarkable vision. My greetings and thanks go also to Christiane Keller,a nd to Gilles Honnegger for his great efficiency. My greetings also to the delegation from the Le Gosier school in Guadeloupe, our most distant member school.’
Mary Owens spoke next, giving the latest information about the Leonardo programme, the various placement options with ACCOR and Jurys Doyle and student placements ; Akos Sasvari, also an outgoing vice-president, spoke of the difficulties of promoting the AEHT in eastern European countries. But before handing over to a new vice-president, he emphasised the team-work and the pleasures of collaborating with the other members of the Managing Committee. Adolf Steindl ended these reports by welcoming the twelve new Croatian schools who had recently joined the AEHT, and by noting that good progressed had been made in extending membership into eastern Europe. He also reported on the Vienna workshop for new eastern European members, while warning that we should not expand too fast.
PLACEMENTS ARE NOT A HOLIDAY
Gilles Honnegger’s contribution to the proceedings was delivered in his usual direct style. He welcomed the presence of Jean-Paul Bernard, and expressed his pleasure that around 40 teachers had benefited from the ACCOR placements. He nevertheless expressed regret that there had been some unfortunate incidents in the placement scheme, and reminded the meeting of the conditions to be met in order to benefit from a placement, and to put it to good use afterwards. He also spoke of the new situation which followed the admission of eastern European countries, and those which would soon be new members of the European Union. ‘Next year I hope to have at least 50 teachers in this scheme aimed at improving European education’ he concluded. Louis Robert thanked Gilles and in his turn encouraged teachers to take part in these placements, while emphasising that ‘they are not a holiday’. 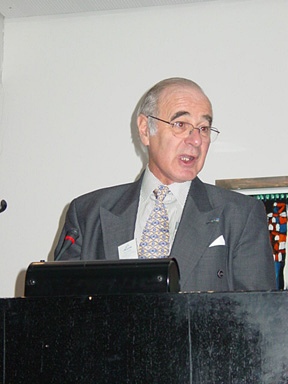 FINANCES, NEW MEMBERS AND APPROVAL OF FINANCIAL ACCOUNTS
Hans Russegger, AEHT treasurer, presented as usual the Association’s accounts for the past year. Delegates had been able to judge for themselves how well the accounts were kept from the documents which has previously been sent out. The AEHT is in good financial health, with an operating profit of €13,537.73. The budget forecast for 2004 shows an income of €126,000 and outgoings of €140,455. Nothing to worry about, said Hans Russegger with a smile, ‘I always overstate the expenditure to avoid nasty surprises.’ As required by the statutes the accounts have been checked by the auditors Jürgen Clausen and Piet Walda. And again in accordance with the statutes, the General Assembly ratified the exclusion of 13 members for non-payment of subscriptions. The two budgets were given the meetings approval by the usual round of applause.
John Rees Smith, AEHT General Secretary, welcomed to the Association around sixty new member schools, as well as several members in the new Professional Members category. The new categories which have been created, in addition to the member schools, are Honorary Members proposed by the Managing Committee to the Executive Board and approved by the General Assembly ; Professional Members, with whom payment for the use of the AEHT logo may be negotiated ; and Observer Members from countries which are not members of the Council of Europe. Observer Members have to be sponsored by a member school, and their applications are dealt with on a case-by-case basis, the membership being on the same basis as an active member. They may also attend the general assembly, but without voting rights. Finally, individual members are those who are not attached to a school – these have no voting rights. Thus for example a Maltese school has applied for membership, and CarryOn and Choice Hotels become Professional Members who may pay an additional charge for use of the AEHT logo.
Following these contributions, president Louis Robert requests, as his final presidential act, the meeting’s approval for the managing team whose mandate has just ended. The meeting gave its approval with resounding applause.
THE 17TH ANNUAL CONFERENCE IN BLED
The agenda was rearranged to allow the Bled team to present proudly the 17th Annual Conference and its venue for the coming year, from October 12th to 17th 2004.
Their video show made everyone want to register immediately ! Bled offers in a very small area everything that a conference delegate could wish for : tourism, culture, accommodation, nature. Nothing was left to chance, and the commentary delivered by four Bled students underlined the pleasant and dynamic presentation. (http://www.aeht-bled.com). 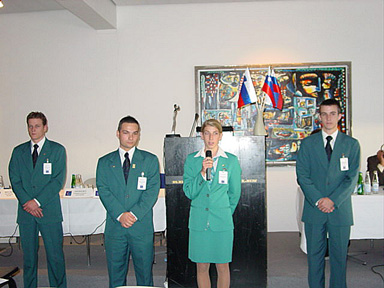 the students from Bled present their town.

A WELCOME BREAK
At the invitation of the Carry On agency, responsible for promoting the Treviso region, the break was an opportunity to taste an excellent ‘Prosecco’, a delightfully sparkling and fresh wine from the region. 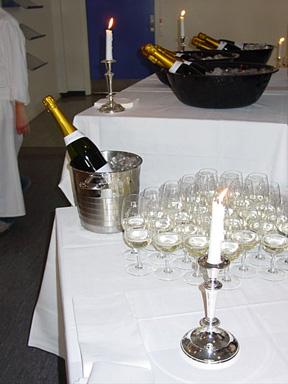 the delightfully sparkling and fresh ‘prosecco’ wine from the Treviso region finds many eager takers !

THE NEW PRESIDENT TAKES UP OFFICE
Surrounded by the members of his Managing Committee, Alfonso Benvenuto, the new AEHT president, thanked his colleagues for electing him, and paid tribute to Louis Robert, his predecessor, for the ‘considerable amount of work he had achieved during his mandate by offering new activities, particularly the extension of membership to schools in eastern European countries. The AEHT is known throughout Europe, and I hope that I am a worthy successor to Louis. My congratulations to Jean-Paul Bernard, to whom we owe the existence of the AEHT, and to all the AEHT’s past presidents. I will strive to make it possible for our young people to meet each other and to discover the importance of peace. I undertake to ensure that all this will continue with the help of my Managing Committee colleagues, and I thank John, Hans and Nadine for all their work.’ 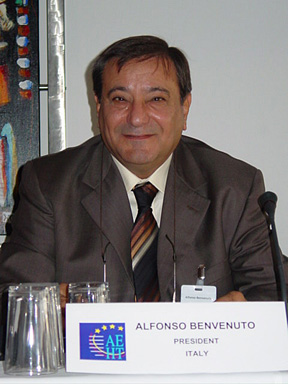 THE PROGRAMME
Continuing his speech, Alfonso Benvenuto also outlined the policies which he would pursue during his presidency. While the objectives of the AEHT will not change, he nevertheless intends to emphasise certain aspects :
The new President reveals his dream : to create a European University delivering qualifications which are valid throughout Europe. In order to support this idea, Alfonso Benvenuto wishes first of all to count his troops in the AEHT : how many schools support his idea, how many teachers, how many students, how many technical staff ?
Alfonso Benvenuto concludes, in true presiential style, ‘I hope to be able to serve the great AEHT family. I can count on the Managing Committee. Long live Europe and long live the AEHT !’
He then went on to remind the meeting of the forthcoming events :
CARRY ON AND THE PROVINCE OF TREVISO
The CarryOn agency is already one of the AEHT’s partners and has organised several events in the past, and will once again be collaborating in the organisation of seminars intended for young chefs to be held during 2004, as part of a competition arranged jointly by CarryOn and the Province of Treviso. Anna Roncan is the AEHT’s main partner in CarryOn. In the same spirit of collaboration, Stefano Busolin, a councillor of the Province of Treviso, promoted the charms of this Italian province where wines and gastronomy are the common denominators of a distinctive life-style. 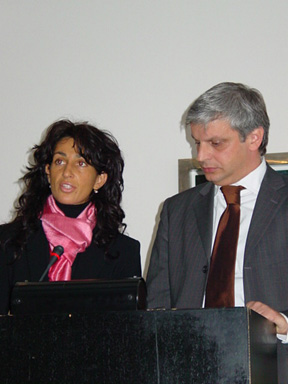 Finally Adolf Steindl provided some details of the organisation of placements, seminars and other events, emphasising in particular the importance of the cost to participants, which should be as modest as possible. Already the calendar for the Annual Conference and for the European Christmas is pleasingly full

ANNUAL DAY OF REMEMBRANCE
Before the end of this General Assembly, Louis Robert, now the outgoing president, raised an idea which had been developing in his mind for some time : that the AEHT and all its member schools should participate in the ‘annual day of remembrance’ under the aegis of the Council of Europe, with the motto ‘Gastronomy for Peace’ ; those taking part in the General Assembly were invited to sign the declaration and resolution. 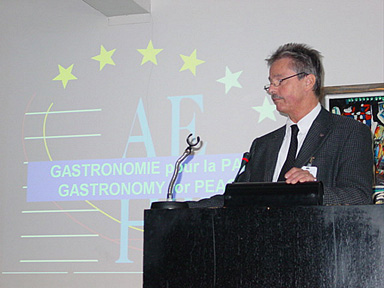 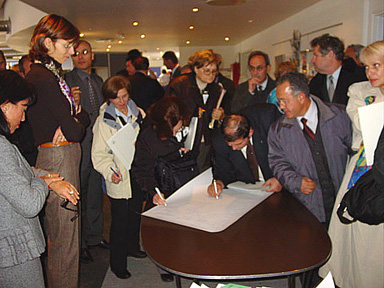