Unlike previous years, the opening event was not an occasion for the usual ceremony. True, the large hall on the third floor of the ‘Hotel og Restaurantskolen’ was not the right setting for such ceremon, and some of the students and teachers were absent, busy preparing for the competitions 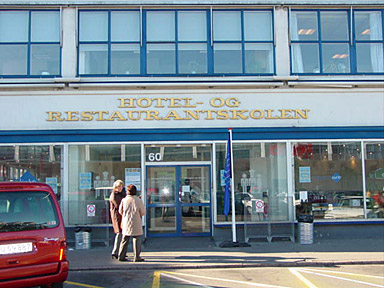 The delegates were greeted by Sören Kühlwein Kristiansen, the director of the school. He declared himself delighted to welcome around 600 people from 30 countries, and proud that his school had organised such an event. He also thanked Mr Preben Rudiensgaard, Member of the Danish Parliament, Mayor of Denmark’s oldest city, and also a doctor by profession. Finally, he wished all the delegates an excellent stay in Copenhagen, and commented that he had even organised some excellent weather. 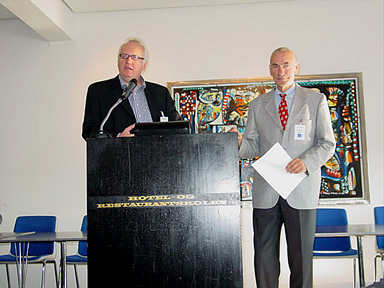 Louis Robert, shortly to be outgoing president, took the opportunity to recall the different stages of the AEHT’s evolution, and in particular its beginnings in 1988 ; he extended a warm welcome to Jean-Paul Bernard, the founding president, who had come to Copenhagen for the occasion. Louis expressed his regret that the co-founder, Martin Bruder, had been unable to attend for professional reasons. He recalled the difficulties inherent in organising a conference in Copenhagen, Europe’s second most expensive city after Zurich. Despite the high cost, representatives of 103 schools had registered for the conference. Louis wished our young people every success, and expressed his pleasure at having been president of the AEHT for three years. He declared the 16th Annual Conference officially open, and wished the new Managing Committee team every success. 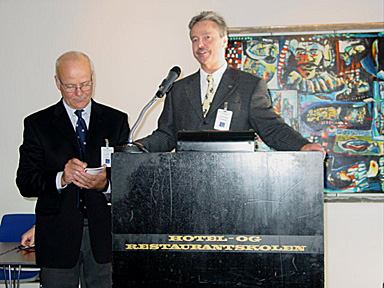 Louis Robert, still president for a few hours, with interpreter John Rees Smith at his side

In his welcoming speech, Preben Rudiensgaard, speaking as a doctor and as a member of the parliamentary committee on health, emphasised the importance of qulaity in cokkery and service : ‘good food is the key for good life’ : such is his crede. He underlined the importance of professional training at all levels : ‘If you have all of this, you will go far’, he said. And on behalf of the prime minister and the Danish government, he wished all those present an excellent stay in Denmark and in Copenhagen. 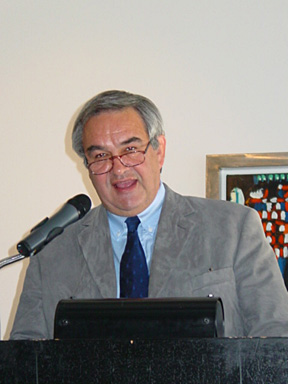 Preben Rudiensgaard, the only outside speaker at the opening ceremony

To end this ‘minimalist’ opening ceremony, the singer Rebecca Forsberg, accompanied on the piano by Andres B. Svendsen, gave a recital of Danish songs in a very poetic register, then ended with a well-known song by Georges Bizet where the word ‘love’ occurred very frequently. Lise Brondorf gave her a bouquet of flowers as the audience applauded, then refreshments were served to mark the start of the 16th Annual Conference in Copenhagen. 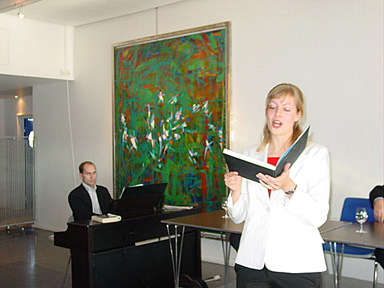 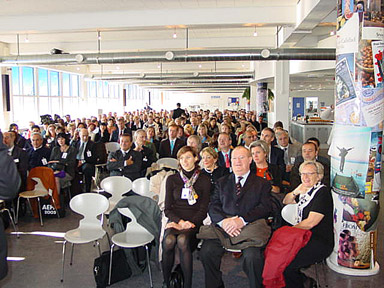 A view of the audience in the large hall of the Copenhagen Hotel School.
FaLang translation system by Faboba