Seen and heard during the 15th Annual Conference

The President offers his services as a knight !
Several events took place during the visit to Triora, perched 800 metres above the valley on a rocky promontory, the village in which there was a trial of 30 witches (streghe) in 1587. The group travelled there in the Luxembourg bus and was greeted by two duty witches, who guided their visitors around the highlights of the village. On the little village square took place another performance by the Rione Orso troupe of players who acted out the famous trial, in the course of which the witches were ‘burned’ to cries of ‘brucia’, ‘burn her’. The guest stars in this performance were dressed in courtly knights’ and ladies’ costumes, and were non other than Louis Robert, AEHT President, Umidia Nardone, Head of the IPSSAR Eleonora Ruffini, and Gerlinde Steindl, wife of vice-president Adolf. They all played their roles to perfection, and the President was the spitting image of a royal musketeer. 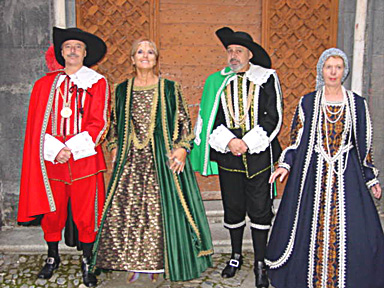 The « guest stars » of the Triora excursion!

A useful present
According to tradition, participants in the Annual Conference receive a little present which, as we all know, serves to maintain friendship. This year the present consisted of a frying pan donated by the Agnelli company, together with pasta bearing the label ‘pennette rigate selectione oro studiata per la ristorante di Barilla".
Colours for service !
What a good idea the IPSSAR had ! The students on duty during the Italian Evening wore T-shirts coloured red, white and green, the colours of the Italian national flag., and for the gala dinner they wore the obligatory black and white. It looked most impressive on stage, under the eagle eyes of the teachers, who also made a great contribution to the proceedings.
A record ?
One of the lady guests in one of the typical local restaurants in the ‘Valle Argentina’ has still not got over it. Just think : the restaurant owner’s family served fifteen courses ‘silver service’ in record time (2 hours 15 minutes !) to three bus-loads amounting to about 150 people. Another strange fact : at Ca’ Mea the tiramisù was served in … chamberpots ! And the ‘grappa’ was liquorice or lemon flavoured. And we received a certificate to prove that we had been there ! 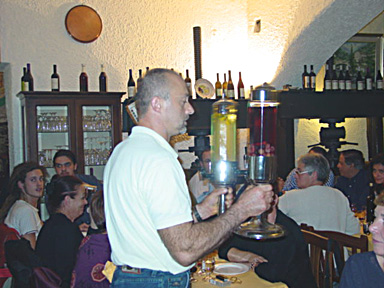 The ‘grappa’ is served. Careful not to drink too much!

United by the Euro
This 15th Annual Conference in San Remo had the distinction of being the first to held since the launch of the Euro. One participant calculated that nine delegations out of those from 28 countries represented, or one third of the delegations, had a common currency, adding that the event was of economic importance for a seaside resort off-season.
And we came across some students starting a collection of one Euro pieces from various countries. The AEHT is there for a variety of exchanges – so why not exchanges of one Euro pieces ?
Up-market Picnic!
The Luxembourg delegation from Diekirch travelled to the conference by coach, and had arranged to pick up other delegations along the way, at Saarbrücken, Bazeilles, Illkirch and Colmar, making a total of 28 people. This was an excellent way of reducing travelling costs, as well as of providing a most useful means of transport on the spot. The coach driver, the excellent Christophe, now knows the hairpin bends of the Valle Argentina like the back of his hand, and is very familiar with the ways of reaching all the hotels in Arma di Taggia. He’s quite an artist in his field. 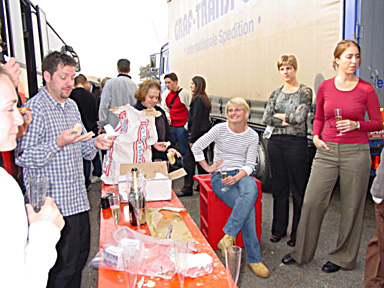 Reserved Parking Places
In Arma di Taggia, the mayor arranged for the parking spaces outside the Vittoria hotel to be reserved for the use of those attending the conference. He also suspended parking around the IPSSAR Eleonora Ruffini for the duration of the competitions.
FaLang translation system by Faboba