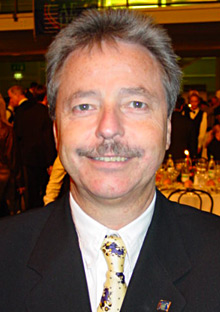 Louis Robert, AEHT president, gladly agreed to give this interview during the excursion to Taggia in the coach which had been hired by the Luxembourg school. He has been president for three years, and in now in his final year, as the statutes dictate. With his usual openness, Louis Robert first of all expressed his admiration for the performance of the Arma di Taggia team.
‘The organisers of this 15th Annual Conference had only five months to put together this sizeable event. They’ve done an amazing job! But the AEHT must keep a close watch on what is offered, and avoid an increase in costs. Especially in terms of what the young people have to pay out. We must also conduct a general review of the arrangements for the competitions, and remind the participants of the original Olympic spirit, which is that ‘the most important thing is to take part.’ The winner of a competition is not a world champion. And students must not be put under pressure by their teachers, and likewise teachers must not be put under pressure by their school directors. The competitions must be games – serious games of course, but games nevertheless.
We must also revise the competition rules, which must henceforth be more strictly applied, and not adapted to local conditions. All participants must have equal chances at the starting line. The only information allowable is that given in English and French – the AEHT’s working languages.
As for the San Remo conference, we are blessed with the sun, the spirit and the warm blood of Italy – a touch of the dolce vita. As far as I can tell, the atmosphere is good. The tourism part of the programme is also of good quality, and the number of participants – more than 700 people – is enormous. Just think of it: 29 countries and 139 schools, and a number of new countries!
This said, we must encourage teachers to take a more active interest in the placements offered by the ACCOR and Jurys Doyle groups. In addition, next year’s elections are also on the horizon. I am supported by a very dynamic Managing Committee, and it is important that there is a dependable succession, that present members take over this task, simply so that there is continuity.
What has caused slight anxiety during this conference is the fact that participants are spread among a number of hotels. We should make sure that everyone can meet under the same roof at least once per day. This is most important so that networking can take place among participants and between delegations – so that we can all meet other directors, teachers and students …’ 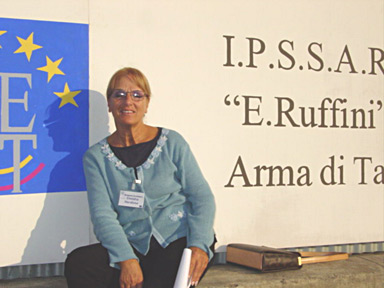 Her blond plait is famous, just like her dynamism. She could be seen everywhere during the San Remo conference. Dashing here and there, seeing everything, giving a touch of leadership here, a piece of advice there, tidying up something else, answering a thousand questions. This is Umidia Nardone, who for the last ten years has been the director of the l’IPSSAR Eleonora Ruffini in Arma di Taggia, a school boasting 500 students and 50 teachers.
Here she comes now, almost running from her school to join the bus and its passengers in front of the Hotel Vittoria. As she flits by, she comments, ‘I still have one or two problems to solve for the gala evening’. But never mind, she still finds the time to say how she was able to arrange the 15th Annual Conference thanks to a number of donors, whom she names: the Region, the Province, the cities of San Remo and Arma di Taggia, and the private sponsors: the Agnelli manufacturing company, Banca Caridge, Barilla pasta, Olio Carli, the Italian wine company to name only the largest.
But without her foot-soldiers she could never have organised such a vast operation. So, as she had already done during the opening ceremony, Umidia first of all expresses her gratitude to her ‘right hand woman’, Fiorella Fachechi, and of course to the entire team of teachers and volunteers and the students who performed magnificently in whatever task they performed.
In a word, Umidia Nardone is a happy woman, even if she makes no secret of the fact that she will be relieved after all the delegates leave for home, especially if they depart with a real desire to return to the region, despite the problems that are an inherent part of organising such an event. Because, as she says, ‘the season is over, many hotels are already closed. It hasn’t been a simple matter to find so many rooms …’ 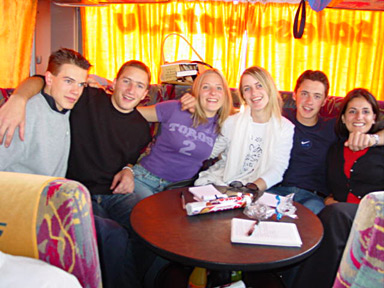 French students give their opinion:

There are several of them sitting at the back of the Luxembourg bus: Bruno from Illkirch, 18 years old, Michael from Bazeilles, 22 years old, Patricia from Illkirch, 21 years old, Caroline from Illkirch, 20 years old, David from Bazeilles, 20 years old and Julie from Illkirch, 22 years old. On the way back home they agreed to give their impressions, and were not reticent about them.
‘Yes, we met up in the evenings, and this mixture of nationalities is fantastic. Yes, we were very pleased to come, it’s a bit of an adventure.’ Some of them had been asked to come, others told to come, by their schools. They have very clear views on the competitions. They thought that the instructions for the competitions on the internet were not precise enough. ‘Things that had nothing to do with what actually took place on the day. And not at all the right level. Sometimes there were big differences …’
But Julie for example did not feel any particular rivalry between the competitors, nor too much spirit of competition. But there is one dominant impression: the briefings very much favoured the Italians. On the matter of languages, they all found a wide gap between ‘what we expected and what actually happened’. The same goes for the equipment: ‘there were really obvious differences in certain work places’. David the pastry-cook is giving his view: ‘For example you can’t work the same way on marble as you do on stainless steel.’ They all agree that conditions were not always the best, but they all agree one thing: ‘Never mind, it was great. It was a good experience, and we had a good laugh.’ And they continue having a good laugh with their friends and fellow passengers in the coach. 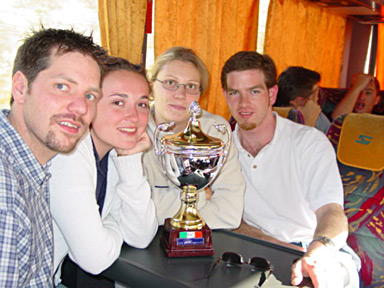 Students from Germany and Luxembourg give their opinions

Further along the bus, Sonia, 23 years old, Rüdiger, 23 years old , Kai, 30 years old, all of them from Saarbrücken, and Danielle, 20 years old, from Diekirch. Just like their friends, they have things to say about the conference and the competitions. ‘There were too many teachers who didn’t speak either of the two official languages during the competitions,’ they chorused. They also thought that the value of the prizes given out were too unequal. ‘It would be better to award medals to the first three, as in the Olympic Games. We can’t read books in Italian. There shouldn’t be any candidates from the organising country in the competitions, and the judging panels should be international’. Kai, the eldest, who has come late to a career as a pastry-cook, is ‘moaning’ because the people accompanying him were not allowed to take photographs. He also suggests that during the prize-giving, ‘it would be a good idea to project onto a screen a few extracts of the competition in question.’ All four of them found it difficult to mix with the other students because of the way the participants were spread out into several hotels, and in future they would like it to be as in an Olympic village, where everyone is together. A four are also in agreement on this: ‘What was great was this mosaic of countries brought together.’ And Rüdiger finished with a smile: ‘I didn’t know there were so many countries in Europe …’ And then, like everyone else, they had loved the beautiful weather …!
FaLang translation system by Faboba