The Annual General Assembly of members of the AEHT was held according to schedule on October 29th in a hall in the ‘Villa ORMOND’, a magnificent building at the entrance to San Remo. A good hundred delegates were present, the agenda was rather long and varied, and on the platform sat the Association’s officers, the proceedings being chaired by the President, Louis Robert. 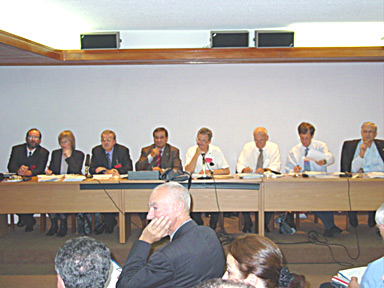 On the platform, members of the AEHT Managing Committee.

In his welcoming address Louis Robert expressed his pleasure at the large number of members – a total of 730 - attending this 15th Annual Conference, and briefly explained to the meeting why the venue, originally Killarney in Ireland, had had to be changed : it was related to the restructuring of the Ministry of Tourism in Ireland. Thanks to the good will and flexibility of the Arma di Taggia school, the San Remo solution took shape in record time, and Louis Robert made a point of publicly thanking the organisers, particularly Umidia Nardone and Fiorella Fachechi, her ‘right hand’. Before moving on to the agenda, he also extended a warm welcome to the observers from The Ukraine, Croatia, Slovenia and Guadeloupe.
The minutes of the General Assembly held in Linz during the 14th Annual Conference were approved without discussion, but Louis Robert immediately stressed the importance of the elections for national representatives, due to take place in 2003. The President also appealed to members to propose new activities for members, then went on to wish a speedy recovery to Gilles Honegger of the ACCOR Group, who had sent his apologies for absence for health reasons. Louis noted the slight decline in participation in the ACCOR placements, and he strongly encouraged the meeting to urge teachers to register for the placements. ‘ACCOR is making a great effort, and we must do justice to their effort’, said the President. He also requested all members to make use of electronic means of communication in order to save postage and to reduce the work involved in sending out circulars. 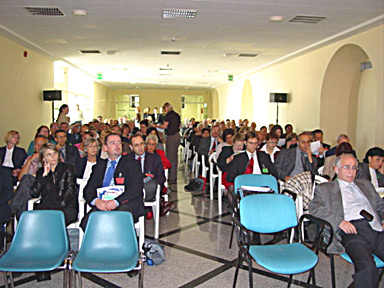 View of the hall during the Annual General Assembly

A representative of the Agnelli company, the Conference’s main sponsor and a manufacturer of professional pans, then made a presentation of his company’s activities. In the same way, later in the meeting a presentation was given by representatives of CENET (Cultural Exchange Network), a not-for-profit organisation which offers professional placements in American hotels to young European students.
After the Activities Report had been unanimously approved, the various vice-presidents made their reports on their areas of responsibility.
Thus Alfonso Benvenuto, in charge of Events, expressed his satisfaction at the achievements of the Italian team, and announced the calendar of the Annual Conferences until 2009 :

Christmas in Europe would take place

In March 2003 a seminar would take place in Kolobrzeg (Poland) on the development of human resources and training.
In April 2002 the Gastronomy in the Springtime festival took place in Budapest (Hungary), and would be offered again in 2004.
The fourth Festival of Gastronomy would take place in Venice from March 27th to 30th 2003, on the theme of the cuisine of Romania, France, Turkey and Greece.
And for Christmas in Europe 2002, which would take place in Kuressaare, the organiser Martha Hubbard announced with her usual zest that 19 schools from 15 countries – around a hundred people in total – would take part in the event.
For his part, Michel Gaillot, responsible for teacher placements together with the La Rochelle branch office, announced that we had received 93 offers of ACCOR placements, as well as offers from a new partner, the Jurys Doyle group, which has 14 units in Ireland and three in England. He reminded the meeting of the arrangements for participants, who receive a travelling subsidy of €240 and pay an application fee of €80. Michel Gaillot also reminded members that two seminars had been held : one in La Rochelle on the subject of ‘Cognac and Pineau des Charentes’, the other in Crete on the subject of Greek Cookery and Longevity’. He also mentioned a proposal from Castelfranco Veneto to hold a series of seminars on aspects of gastronomy, the first to take place in February 2003.
Mary Owens, responsible for placements in Ireland, stated that in the past year there had been very little activity in this domain, involving only around ten students from outside the EU. The main reason for this was the difficulty in obtaining work permits, and the problem of requests for short placements. Mary Owens admitted that the problems relating to foot-and-mouth disease and to the 11th September attacks had had a negative influence on applications, as had a general economic downturn.
Adolf Steindl, responsible for the promotion of the AEHT in former Eastern European countries, reminded the meeting that the AEHT currently has 334 members, but urged caution: ‘Let us try to consolidate our membership in the newly recruited countries’, he recommended, and urged the new members to participate in our activities. He expressed the desire for improved communication in both directions, particularly by e-mail, and, in relation to travel to the Annual Conference, he strongly urged members to travel together whenever possible in order to reduce costs.
Akos Sasvari, responsible for relations with eastern countries, informed the meeting of the difficulties experienced by the Serb delegation in coming to San Remo, and of the problems of the Timişoara school who complained that it had not been informed in time. He also mentioned the Gastronomy in the Springtime festival held in Budapest in April 2002, which had attracted 47 participants from 17 different schools. The event would be offered again in 2004.
The first part of the General Assembly concluded with a short speech from Giovanni Bellino, the first deputy mayor of San Remo, who had come to wish us luck with our work, and to wish us a pleasant stay in his city. But our work was not yet finished, and an espresso or a fruit-juice later, and after the family photo taken beneath an enormous rubber tree, delegates were called back to the meeting hall. 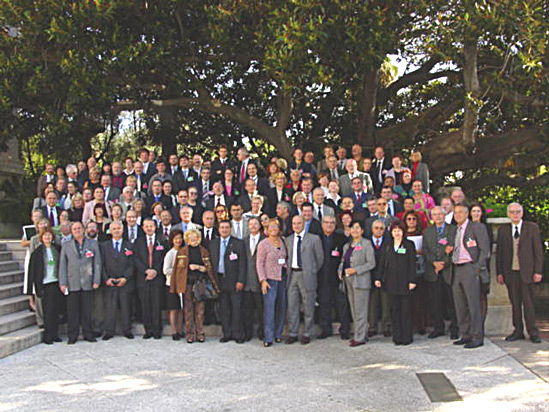 Senigallia will host ‘Christmas in Europe in 2003, from 12th to 17th December. Alfonso Benvenuto, director of the IPSSAR ‘Alfredo Panzini’ and vice-president of the AEHT, took delight in presenting the event, and in showing us the treasures of Senigallia and its region, to the hearty applause of the delegates who took little convincing. Each participant was presented with a folder containing a set of documents and a CD-ROM giving an explanation in French (one of the AEHT’s official languages) of the ‘Christmas in Europe’ event.
The financial report, presented by Hans Russegger, our long-serving treasurer, gave rise to the usual comments : thus the entrance fee remains at €150, the annual subscription at €255. He announced that six members were to be excluded (as against 14 in 2001), and noted the considerable subsidy from the Luxembourg government, to whom our thanks were due. The meeting unanimously adopted the report, as well as the budget forecast of €132,075.
Another report unanimously adopted was that of the General Secretary John Rees Smith, who in a few sentences outlined the number of AEHT members : there are 334 member schools, among them 39 new members, 15 of them Italian schools ! He also emphasised the sterling work carried out by Chantal Bernardy, whose painstaking work ensures that the membership files is kept up to date.
Christian Beck, Danish representative, briefly presented the programme for the 16th Annual Conference to be held in Copenhagen from October 15th to 19th 2003. He joked that he would not be able to guarantee the same beautiful weather as in San Remo.
Under Any Other Business, there was discussion about language seminars, about the simplest way of joining the AEHT, about new members, about the matter of which languages could be used during the briefings for the competitions and during the competitions themselves. In this respect it was made clear that participating students must master at least one of the AEHT’s two working languages. And finally Annie Collinet, head of the Bonneville Hotel School in France, made a point of thanking publicly those schools which had engaged in placement exchanges with her school.
The meeting ended towards 12.45, and the delegates made their way to lunch at the Caprice restaurant just opposite the San Remo casino.
FaLang translation system by Faboba