Originally the 15th Annual Conference of the AEHT had been scheduled for Killarney in Ireland, but in the end it took place from October 28th to 31st in San Remo, on the Italian Riviera, not far from the border with France. This was an almost-last-minute change of plan, but had no real effect on this magnificent European event.


The opening ceremony of the 15th Annual Conference took place in the splendid setting of the Ariston theatre in the very centre of San Remo, filled with more than 700 participants, a record number, proving the need, if proof were required, for such a Europe-wide event within the AEHT. 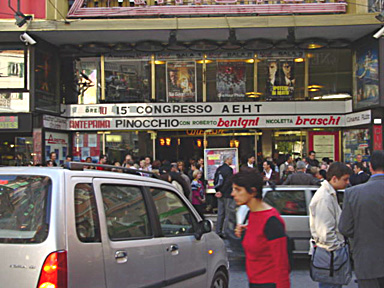 Conference participants arrive from all directions in front of the Ariston Theatre where the opening ceremony takes place.

Despite all the organisational problems, the IPSSAR Eleonora Ruffini, lead by Umidia Nardone, has picked up the challenge and made a great success of it in barely six months. It was with great pride that Umidia addressed the delegates with a few words of welcome, before taking the AEHT flag carried from the back of the hall by a small team of young people. With Umidia on the platform were Louis Robert, AEHT President, Adolf Steindl, Vice President and organiser of the 14th Annual Conference in Linz in 2001, Alfonso Benvenuto, Vice-President and Italian representative, and John Rees Smith, AEHT General Secretary. This solemn moment is a symbol of the AEHT’s continuity in Europe, to the strains of the European hymn, against a backdrop of the flags of all the countries present at the conference. 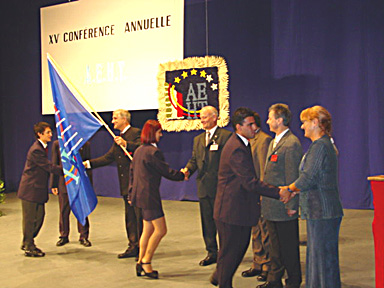 The official handing over of the flag to the Eleonora Ruffini school.

The pleasure of opening the 15th Annual Conference fell to Louis Robert, AEHT President, who also thanked Umidia Nardone and her team for taking over the organisation from Ireland, and wished all present a fruitful, positive and pleasant stay in San Remo. 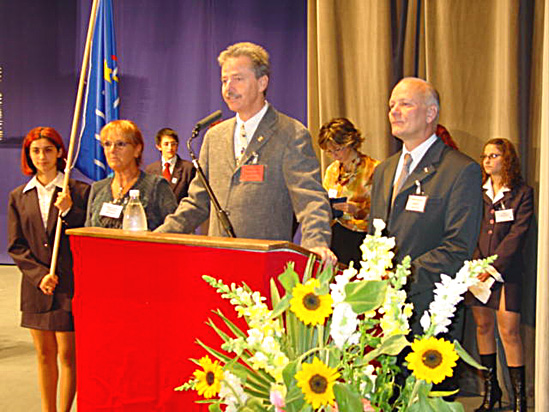 Next came the turn of each country to be called. This beautiful tradition has now been made richer by the playing of a few bars of the country’s national anthem, and each national flag being placed on the stage by a team of young dancers from the ‘Dance Studio 89’ of San Remo. 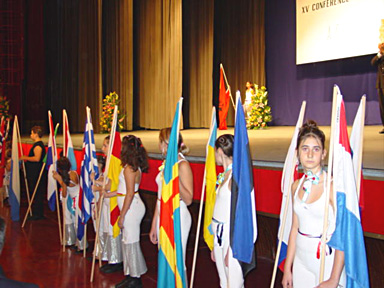 Each country’s flags are placed on the stage. 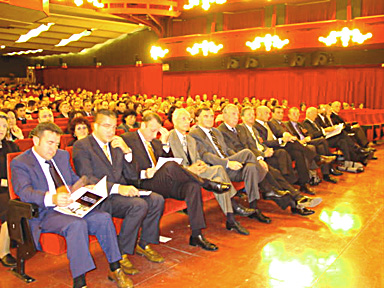 View of the hall, with the VIPs on the first row.

Before the speeches came an intermezzo consisting of dances performed by the ‘Dance Studio 89’ mentioned above. The first speaker was Giovanni Berrino, senior deputy mayor of San Remo, who expressed his great pride at being able to host this Conference, and his great pleasure at seeing so many students who had come together to take part in the competitions. He also warmly invited everyone to discover the charms of the region, and took the opportunity to thank Umidia Nardone for her dedication. 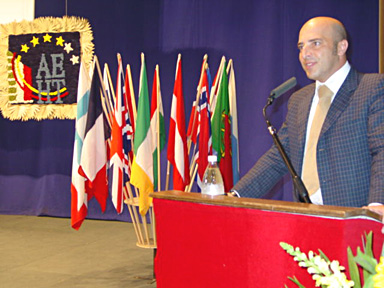 It was next the turn of Gianni Giuliano, president of the province of Imperia, who declared that he too was delighted to be present. He warmly thanked the organising team, and emphasised how important hotel and tourism schools are in a region which attracts so much tourism. 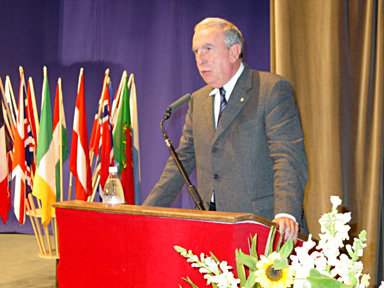 Dr Paolo Barabaschi, deputy director for education in the province, also emphasised the vital importance of tourism, and the important role played by the province of Imperia, true capital of gastronomy, universally acclaimed for its ancestral recipes, its olive museum and the region’s natural products. 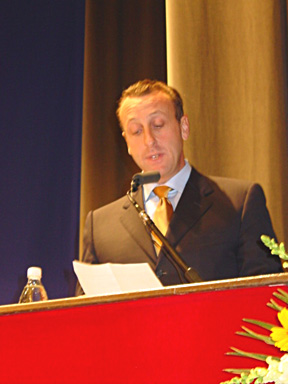 Dr Lorenzo Barla, the mayor of Arma di Taggia, was equally enthusiastic: since some of the participants were lodged in his city, and since Arma di Taggia was also the location of the Eleonora Ruffini school, he made no secret of his pleasure at the choice of venue, and of his joy at agreeing to help as much as possible with the organisation of such an important event. While praising the irresistible charms of Liguria, he also pointed out the extent to which the local economy depended on tourism, which is thus a vitally important component of the economy. The mayor ended his speech by expressing his confidence in the Eleonora Ruffini school, and in its director Umidia Nardone, as well as in her team. ‘This is where tomorrow’s Europe begins’ he stated, not without a hint of emotion. 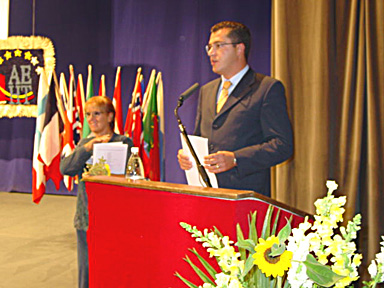 Dr Giovanni Zagarella, representing the Education Department of the province of Imperia, emphasised the importance of the quality of work and training, of student exchanges, underlining how vital such European conferences are. He also thanked the team from the IPSSAR of Arma di Taggia for their excellent work. 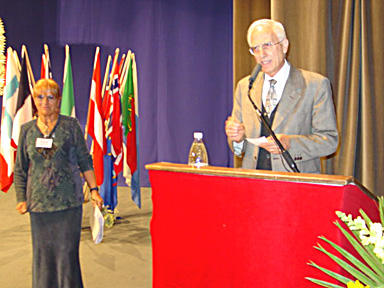 Gianni Plinio, vice-president of the Region of Liguria and deputy director of tourism, emphasised the importance of the AEHT event, which takes on a special significance since the city of Genoa has been designated European Capital of Culture for 2004. He wished all the participants a pleasant stay in San Remo, wished them luck with their various tasks, and hoped to see them again soon, in Liguria, of course ! 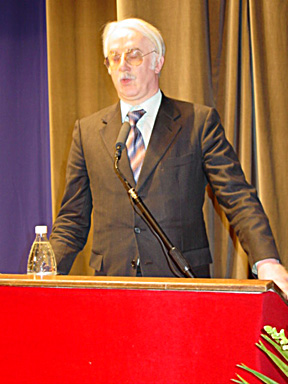 Before the end of this opening ceremony, Umidia Nardone invited onto the platform her ‘right hand’, Fiorella Fachechi, who was loudly applauded. Then the stage was cleared to make way for the singer Manuela who had come to sing some Italian hits which were well known throughout the world, and with which the delegates sang along. This was followed by a performance of classical dance by the ’89 Dance School’ of San Remo. 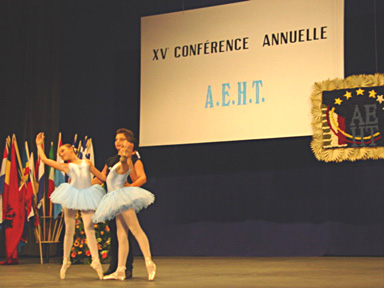 
The conclusion of this opening ceremony took the form of expressions of thanks. Umidia Nardone, while wishing everyone a pleasant stay and a successful conference, asked for the delegates to applaud the Budapest school : ‘thanks to this school for taking the name of Giorgio Perlasca, an Italian hero.’ Thanks to Anna Blanghi who had stage-managed the opening ceremony. And finally the screening of a video, ‘Liguria, a world of colours’, depicting only a part of what the participants would be discovering during these few days in San Remo and the surrounding area.


The 15th AEHT Annual Conference was now well and truly under way, with the added pleasures of the sun, the sea, a convivial and friendly atmosphere, and all the charm of Italy.
FaLang translation system by Faboba